The Yellow Creek Restoration Project in the Blacklick Creek Watershed, was launched in 1998 as a 5 phase plan to restore the last 3.5 miles of Yellow Creek in Indiana County.  At the time, that stream section was the only one in the entire 420 square mile Blacklick Creek Watershed meeting DEP recommended comprehensive, sequential approaches to watershed restoration.  Two passive treatment systems were built during Phase 1.  System 1A was built in 1998 and System 1B in 1999.  Each system consists of a collection pond, a vertical flow pond and a settling pond.  Both systems were modified to sulfate reducing reactors (VFR) in subsequent upgrades.  System 1A treats the discharges from the Meco Mine. Discharges from an un-named mine are treated by System 1B.

Three passive treatment systems were built during Phase 2 (Systems 2A, 2B and 2C).  Built in 2002, System 2A initially consisted of a collection pond, a vertical flow pond and a setting pond.  Discharges from the Judy #14 Mine are collected and piped ½ mile to the collection pond.  Part of the discharge water is diverted to System 2B that was built in 2002.  Treated water from this system is discharged into the System 2A settling pond.  In subsequent upgrades, Systems 2A and 2B were modified to sulfate reducing reactors (VFR).  In 2004, a U-shaped wetland was added to the settling pond to improve the removal of suspended iron.  System 2C was designed and built completely as a deep bed VFR in 2003.  A discharge from the abandoned Tide/Waterman Mine is collected and treated.  This system also consist of a collection pond, VFR and a settling pond/wetland.  Reports, maps, photos, and water sampling results have been posted on the Datashed web site at www.datashed.org.

Yellow Creek Systems 2A and 2B Settling Pond 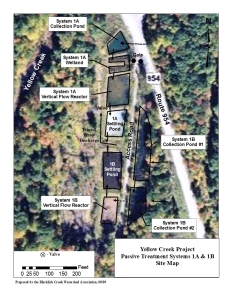 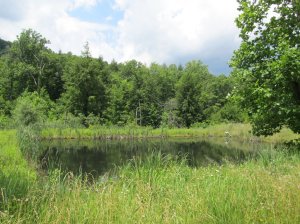 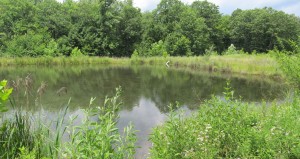 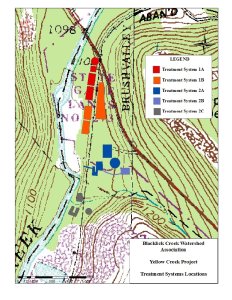